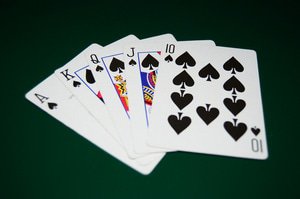 If you are going to have a shot at winning when you play any version of poker, whether it is Five-Card Stud or Texas Hold'Em, then you will want to learn poker hand rankings and memorize them. In games like this, a single card can make or break a person and it is important to have a basic idea of what someone else at the table might have. After all, you can only win by forcing other participants to fold or by having the best hand.

In Hold'Em, each participant is given two cards and five are turned up in rounds in the middle of the table for the community to share. The objective is to use all seven to create the best poker hand rankings possible. There are times when you will need to use both, but there are other times when you can simply disregard your personal cards. This happens, for instance, whenever a royal flush is turned up for the community. If this should happen, then everyone who has not folded takes an equal part of the pot. 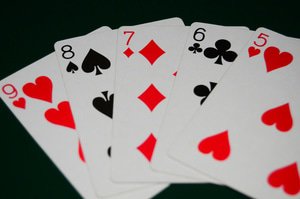 Learning poker hand rankings from high to low is incredibly important in Hold'Em because you will be able to anticipate what other participants may have - or what they might be hoping to get. This, in turn, will help you make better decisions of your own. From high to low, they are the royal flush, straight flush, four of a kind, full house, flush, straight, three of a kind, two pair, one pair and high card. If two players are battling in the showdown with the same high card and there is no one else to beat them, then the "kicker", or the second highest card is used to determine the winner. If both players have the exact same hands, the pot will be split.

Due to the nature of Hold'Em and the way that it is played, the probability of being able to successfully build a royal flush is incredibly low. In fact, it might be possible to play 1000 hands and never see anything higher than a full house. Again, once you have these rankings memorized, you can use them - along with your other skills - to determine what your opponents may be holding.